WHEREAS, On January 14th, 2013 a Gun Control Bill known as NY SAFE Act was rushed through the Senate & Assembly without a single Public hearing or input from the various Law enforcement agencies located around our State, and

WHEREAS, Even the State lawmakers did not have time to review the bill as presented leaving questions about implementation and regulation of this new law, and

WHEREAS, This law should focus on increasing penalties for criminals who use firearms to harm and threaten law abiding citizens and address the issues of mental illness related to violence, and

WHEREAS, the Hamburg Town Board recognizes that NY SAFE Act must be repealed and any further attempts to pass gun control legislation must go through the proper procedures and must allow for appropriate public comment.

NOW THEREFORE BE IT RESOLVED, that the Hamburg Town Board urgently asks Governor Andrew M. Cuomo & the Legislative leaders to suspend this law as soon as possible and to look at all of the aspects of gun control using the proper legal procedure to bring about a law that will address gun control in a more logical manner, focusing on the real issues related to gun control – a law that will strengthen the effect on public safety and not infringe upon our constitutional rights. 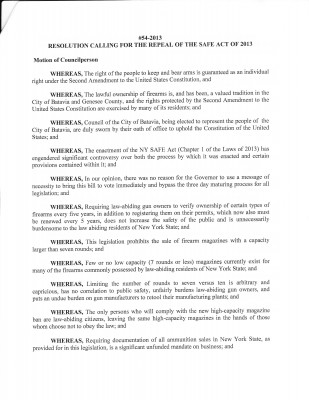 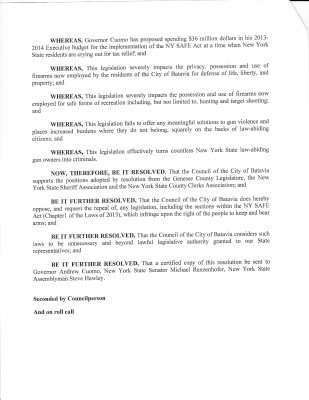 WHEREAS, there is currently pending in the NYS Assembly Bill No. A3908-2013 and NYS Senate Bill no. S3853-2013 which will require owners of firearms to obtain liability insurance in an amount not less than $1 million dollars: and

WHEREAS, said proposed legislation has been referred to the Assembly Legislative Committee on Insurance; and

WHEREAS, the proposed legislation constitutes nothing more than a back door attempt to prohibit legal gun ownership in this State; and

WHEREAS, such mandatory insurance coverage would accomplish nothing more than to burden responsible, law abiding taxpayers while doing nothing to prevent the perpetrators of criminal acts involving guns; and

WHEREAS, it is constitutionally impermissible to require citizens to obtain liability insurance to exercise their rights under the 2nd amendment; and

WHEREAS, the only predictable outcome of the passage of this law is an increase in profits to insurance companies; and

RESOLVED, that the Town Board of the Town of Barton strongly opposes any attempt to mandate gun owners to buy liability insurance; and

BE IT FURTHER RESOLVED, that the Town Board of the Town of Barton requests the members of the New York State Senate and Assembly who represent all, or part of the Town of Barton to reply, in writing, with their views on, and actions taken, in support of, or opposition to the proposed gun insurance bill; and