The SAFE Act adds a new requirement that when someone dies all firearms must be reported on a separate inventory from and be filed with the Division of Criminal Justice Services as well as with the court. See below for a copy of the inventory form:

The Village of Albion is the latest Orleans County municipality to pass a resolution against the SAFE Act. The resolution was adopted by the village on July 24th, 2013.

As of August 7th, there are only three municipalities left within Orleans County that have not yet passed a resolution against the SAFE Act..

WHEREAS, the right of the people to keep and bear arms is guaranteed as an individual right under the Second Amendment to the United States Constitution; and,

WHEREAS, the right of the people to keep and bear arms for defense of life, liberty, and property is regarded as an inalienable right by the people of Village of Albion; and,

WHEREAS, the lawful ownership of firearms is, and has been, a valued tradition in Albion, and the rights protected by the Second Amendment to the United States Constitution are exercised by many of our residents; and,

WHEREAS, the people of the Village of Albion and the State of New York derive economic and environmental benefits from all safe forms of recreation involving firearms, including, but not limited to, hunting and target shooting while utilizing all types of firearms available under the Constitution of the United States; and,

WHEREAS, the enactment of the NY SAFE Act (Chapter 1 of Laws of 2013) has prompted significant debate over both the process by which it was enacted and certain provisions contained within it; and,

WHEREAS, having reviewed the legislation and severely restrictive time constraints under which it was passed, it is our conclusion that there is no possible way any individual could read the entire bill and understand its full implications prior to voting on it; and,

WHEREAS, our state legislators most certainly did not have the time to request, and receive, the input of their constituents regarding this matter; and,

WHEREAS, there will be a significant financial impact due to the permits that will have to be renewed requiring additional manpower and computer systems their associated expense; and,

WHEREAS, Governor Cuomo has proposed spending $36 million dollars in his 2013-2014 Executive Budget for the implementation of the NY SAFE Act at a time when New York State residents are crying out for tax relief; and,

WHEREAS, this legislation severely impacts the possession and use of firearms now employed for defense of life, liberty, and property; and,

WHEREAS, this legislation severely impacts the possession and use of firearms now employed for forms of recreation including, but not limited to, hunting and target shooting; and,

WHEREAS, we find the legislation does little more than negatively impact lawful gun ownership.

NOW, BE IT RESOLVED, that, the Village of Albion does hereby oppose, and request the repeal of any legislation, including the sections within the NY SAFE Act (Chapter 1 of the Laws of 2013), which infringe upon the right of the people to keep and bear arms;

BE IT FURTHER RESOLVED, that the Village of Albion requests the members of New York State Senate and Assembly who represent all, or part of, Orleans County to reply, in writing, with their views on, and actions taken, in support of, or opposition to, the NY SAFE Act;

I hereby certify that the foregoing is a true and correct transcript of a resolution duly adopted by Village of Albion on the 24thday of July, 2013.

The delegate body overwhelmingly approved a resolution urging the New York State Legislature to repeal the Secure Ammunition and Firearms Enforcement (SAFE) Act. Hoping to ensure that veterans ceremonies involving weapons were not in violation of the law, the resolution passed with a thundering roar of “ayes.” The resolution claims the gun control act goes too far and violates the Second Amendment Rights of veterans, and also urges police departments to respect veterans rights to own firearms of their choice.

More information on our FOIL request

Please continue to visit your town and village boards, and use Privilege of the Floor to express your desire that they pass resolutions in support of Civil Rights and 2A, and also, to review the municipal list, and let us know if we are missing any!

Additionally if you are part of any civic organization, particularly one impacted by the law, please consider pursuing passage of a resolution or writing a letter of opposition. Many police, veteran, medical, and hunting organizations have already done this.

On May 15, many of us sent a FOIL request to the office of Governor Cuomo to send us a list of Resolutions he has received on the SAFE act.  July 12th we got a response:

This letter responds to your correspondence dated May 15, 2013 which, pursuant to FOIL, requested:

lists of the following categories:

Please be advised that we performed a diligent search for the records you request. Although the Executive Chamber does not possess any list containing the information that you seek, we located five hundred fifty-eight (558) pages of resolutions and official statements from counties, towns, villages, and other governmental bodies. You may access the records here: https://www.yousendit.com/download/bWJvUGhRMm1wcFdybHNUQw

To the extent you are not satisfied with this response, pursuant to Public Officers Law § 89(4)(a), you have thirty (30) days to take a written appeal of this determination. You may make an appeal by writing: FOIL Appeals Officer, Executive Chamber, State of New York, Albany, New York, 12224. 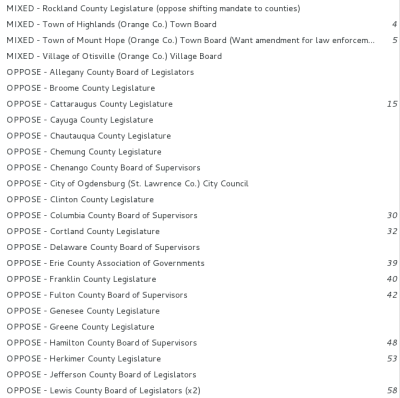 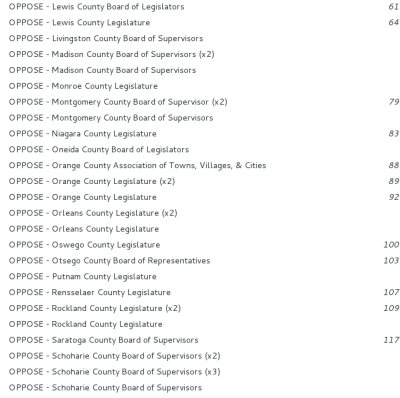 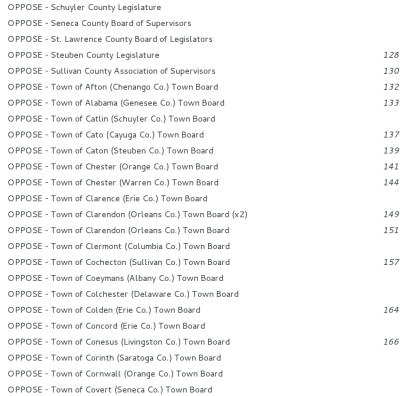 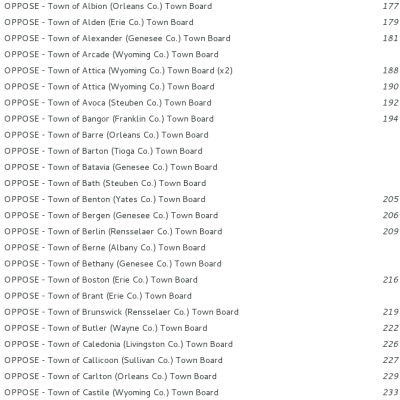 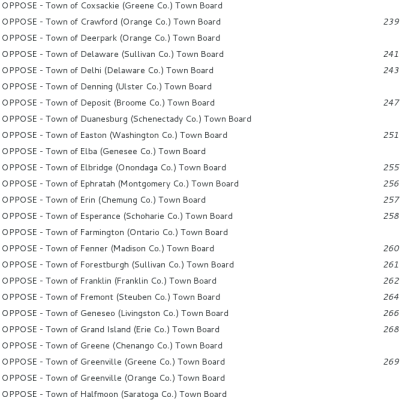 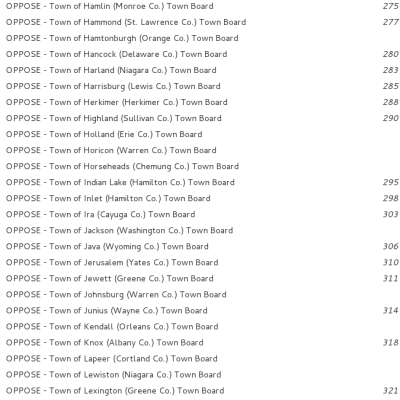 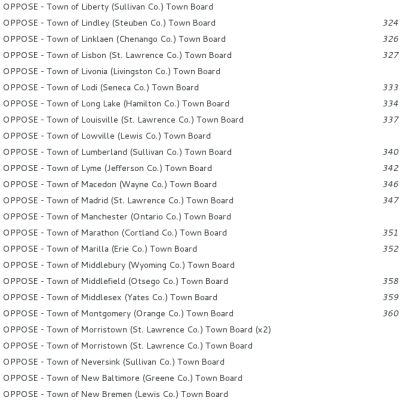 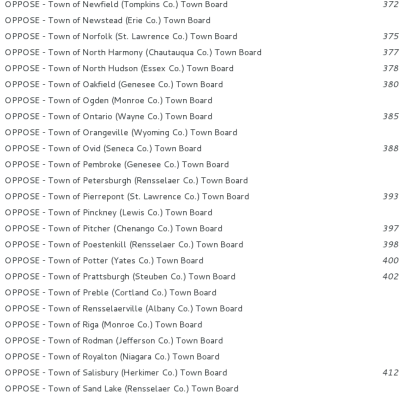 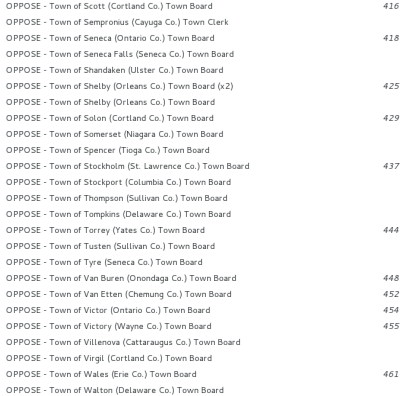 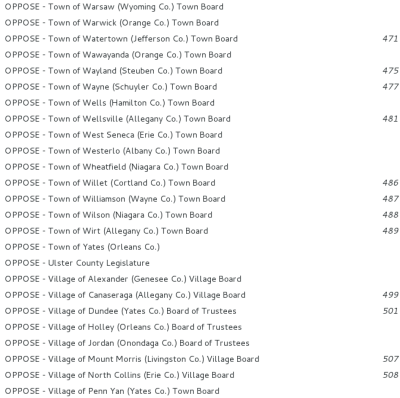 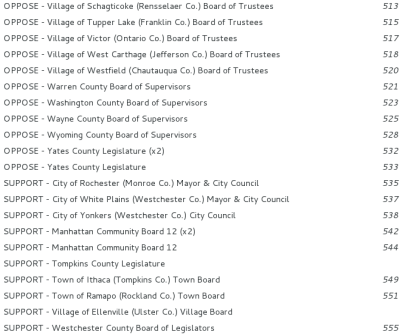 WHEREAS, we the board members of the Town of Potsdam, NY believe the New York State Secure Ammunition and Firearms Enforcement Act (SAFE Act) was hastily passed and reflects many flaws and poorly considered aspects, and

Whereas, we feel there is a need for a thoughtful debate on the matter of restrictions on the use of firearms in our society,

NOW THEREFORE BE IT RESOLVED that the Potsdam Town Board request the our New York State Representatives convene public hearings to gain information which would be used to amend, replace, and repair flaws in the SAFE ACT, and

Be it further resolved that the Potsdam Town Board directs the Town Clerk to send this resolution to the Governor and Assembly and Senate representatives.