RESOLUTION CALLING ON GOVERNOR ANDREW M. CUOMO AND THE STATE LEGISLATURE TO AMEND CHAPTER 1 OF THE LAWS OF 2013, THE NY SAFE ACT, TO ADDRESS COUNTY CONCERNS AND IMPLEMENTATION PROBLEMS

WHEREAS, Chapter 1 of the Laws of 2013, known as the New York Secure Ammunition and Firearms Enforcement (NY SAFE) Act, was enacted on January 15, 2013; and

WHEREAS, the lawful ownership of firearms is, and has been, a valued tradition in the United States, and the rights protected by the Second Amendment to the United States Constitution are exercised by many of our residents; and

WHEREAS, the enactment of the NY SAFE Act (Chapter 1 of the Laws of 2013) has engendered significant controversy over both the process by which it was enacted and certain provisions contained within it; and

WHEREAS, the expedited process in crafting the NY SAFE Act resulted in complex policy changes, many of which resulted in problems with implementation in the months following the legislation’s enactment; and

WHEREAS, the law requires the DCS to determine whether or not he/she agrees that the person is likely to engage in such conduct, and if so, the DCS is then required to forward that person’s name to the Division of Criminal Justice Services (DCJS); and

WHEREAS, the New York State Office of Mental Health (OMH) created a portal called ISARS for mental health practitioners to report information required under the statute, including the individual’s county of residence; and

WHEREAS, a report from ISARS is sent to the DCS at the person’s county of residence and then, if approved by the DCS, it is forwarded to DCJS for confirmation of the person’s identity before finally forwarding that information to the sheriff or local law enforcement; and

WHEREAS, though the OMH ISARS portal has reduced the workload burden on counties in complying with the SAFE Act, it has not eliminated the burden, and county mental health departments continue to have to redirect staff away from their duties to review a significant volume of SAFE Act reports many of which require follow up or additional information from the reporting practitioners; and

WHEREAS, the requirements of the SAFE Act are burdensome to county mental health departments, by straining resources and encumbering employees, without the funding required to support this mandate; and

WHEREAS, county clerks across the state incurred significant burdens, costs and strain on their resources in dealing with new requirements of this act, including increased or new requirements in the firearms registration process, new FOIL opt-out procedures, and other permit and filing related matters; and

WHEREAS, counties will incur these problems again when the pistol permit recertification process occurs, increasing requirements for county clerks offices where local applications are currently processed; and

WHEREAS, county law enforcement, police officers and peace officers have experienced problems in gaining timely access to ammunition for their job training purposes; and

WHEREAS, the SAFE Act expressly states that no costs of this law shall be borne by local governments, however many county departments have experienced significant increases in their workload due to the new requirements the law creates; and

WHEREAS, 52 Counties in New York State have passed resolutions opposing the SAFE Act.

BE IT FURTHER RESOLVED, that NYSAC calls on the New York State Police to provide clarity and assistance to counties as the State Police develops the statewide database; and

BE IT FURTHER RESOLVED, that copies of this resolution be sent to the sixty-two counties of New York State encouraging member counties to enact similar resolutions; and 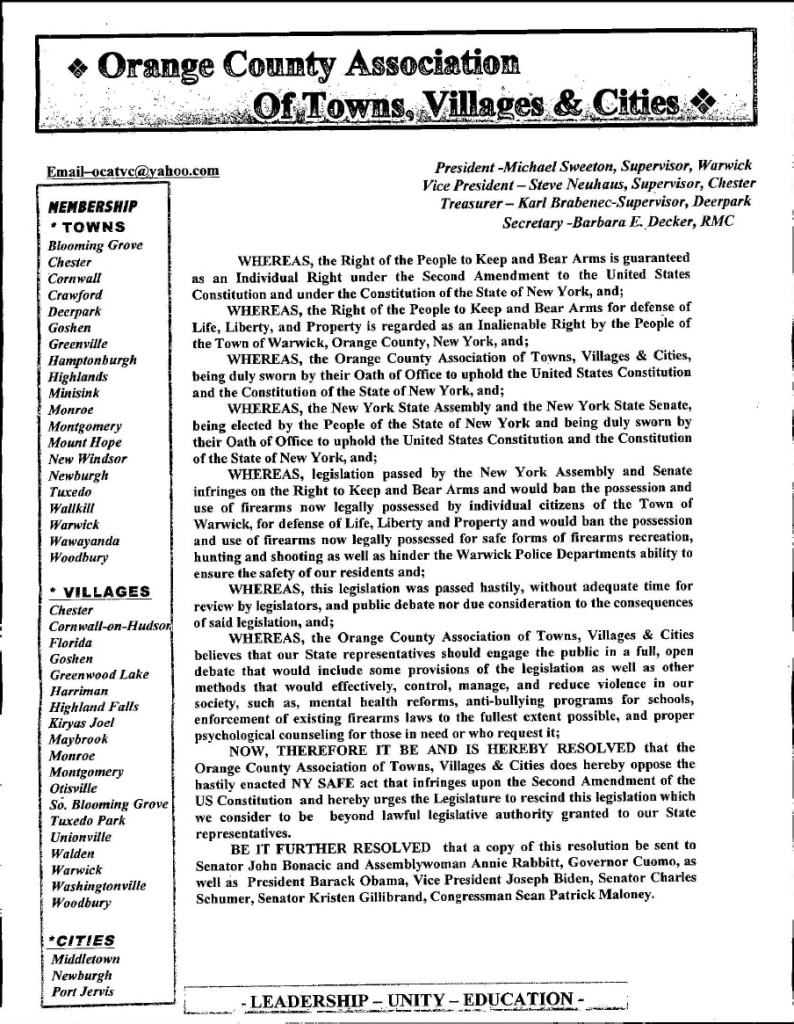 On Monday September 9th, the Lyndonville Village Board became the 14th Orleans County municipality to pass a resolution against the ‘un’SAFE Act. The resolution passed unanimously.

This makes Orleans County the 1st county in New York State to have all municipalities voice their opposition to the SAFE Act by passing a resolution.

This is a great achievement and it is hoped that other counties will soon be able to share the same distinction.

On Monday September 9th, the Medina Village Board unanimously passed a resolution against the NY SAFE Act. It is the 13th Orleans County municipality to pass a resolution.

Shooters Committee on Political Education A New York State Not For Profit Volunteer Organization dedicated to the preservation of the Second Amendment Rights for New York Citizens.

SCOPE is Creating a  SAFE Act Voter App for your Smart Phone.
Hey  , do you  realize that 321 municipalities and 52 counties have stood up and said NO to the SAFE ACT?  And, the elite in Albany still refuse to listen to us! Within those 321 municipalities and 52 counties there are people running for election that refused to vote against Albany’s infringement of your rights.  They choose to go along with the Governor to get along.  The time has come for civil rights and the constitution to override party politics in New York State!

Now it is time to support the people that voted for resolutions and tell the non-supporters NO!  Perhaps then, Albany will listen to us.

SCOPE is partnering with NY SAFE Act Resolutions  to compile the names of local officials that voted against and for the Resolutions condemning the NY SAFE Act. The task is huge and we need your help . We need to know what you,  knows about your local political situation to make this happen.

We need local grassroots help in determining the grades of county and town race candidates.

If you have knowledge of a town or county office holder that is running for election, let us know and we will add them to the Report Card.

Here is how to do it:

Step one: Check here to see what is needed in your county to avoid duplicates.
http://www.scopevoterapp.org/#page2

Then Click this link and fill in the blanks.
http://www.scopeny.org/local_races_in_2013.html

The rules changed with the passage of the SAFE Act.  No gun owner or citizen concerned with civil rights can sit back and watch any longer.  Plan to VOTE make sure your family votes.  Make sure your club members vote. Plan voting parties and meet ups.   Remember the long line in Albany in January?   We want to see long lines at the polls with people checking the SCOPE S.A.F.E. Act Voter App!
Report your voting experience on Facebook   and give post election results for the group.

Only a Few Days Left !
Have you heard about he movie Assulted,?  It is being shown  Monday, September 16 7:00pm – 8:44pm
in Amherst, NY at AMC Maple Ridge 8 for $11.00 per ticket.  SCOPE members are encouraged to attend or support the cause by purchasing a ticket for the show. Don’t miss this unique opportunity to see Assaulted: Civil Rights under Fire on the big screen! Don’t let the media and the anti gunners control the conversation.  We need 60 more people to sign up for a ticket before Sept 9th or the movie will be cancelled.

Check your Voter Registration Today!
Notice the link to the Elections Office on the upper right of SCOPENY.org is goes to the
Board of Elections.  Click it and fill it out and a registration form will be mailed to you for changing your address your party or simply to register to vote.  The Primary’s are coming up on Sept 10th.

The SCOPE Banquet is October 11th, read about it here http://www.scopeny.org/events.html

On Election Day, remember standing in the snow and mud trying to make Albany listen.  They didn’t.  Now it is your turn.

SCOPE SAFE Act Voter App  will be available from your phone.

SCOPENY is a non profit 100% Volunteer “Civil Rights Organization” looking out for Gun Owners Rights in New York State.Please join or renew today. For about the cost of a box of ammo you can help SCOPE help protect your Second Amendment Rights.

Please do not reply directly to this message, as your reply will bounce back as undeliverable.Please forward this e-mail to friends and family.
Did you know that you can find the name and contact information for your Federal Senator automatically by signing up for SCOPE Alerts? That’s right; the system works off of your address and zip code.  It will also find the name and contact information for your Federal Representatives.  It even goes down to the State Senators and Assembly Representatives.  If you are getting this email you are already signed up.  Forward this to a friend that believes in civil rights and have them sign up at SCOPE Alerts.