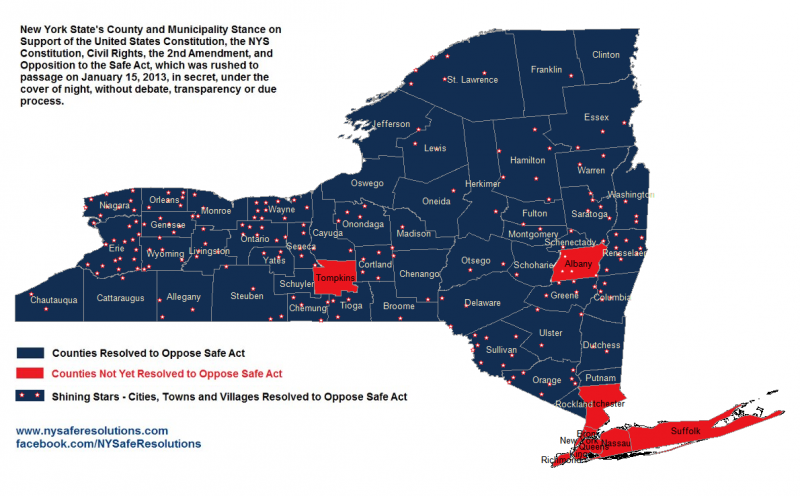 The formal opposition of local government bodies across the State of New York against Governor Cuomo’s Safe Act reached a significant milestone this week, with the 200th municipality adopting a resolution to repeal or oppose the Governor’s unjust law. These 200 municipalities are in addition to the 52 county legislative bodies across the state that have publicly opposed the Safe Act since it was rushed into law on January 15th, 2013, via an unwarranted “Message of Necessity”. Every week, city, town and village boards, supported by citizens, law enforcement leaders, civic groups and other organizations, are making strong public statements in support of the United States Constitution and New York State Civil Rights laws, and saying “NO” to the Governor Cuomo’s Safe Act, which infringes upon the 2nd Amendment and targets law-abiding citizens, rather than addressing criminal and mental health issues that, unfortunately, are primarily the source of gun violence.

Municipalities that have passed resolutions opposing the Safe Act are depicted on the state map as liberty loving “Shining Stars” of freedom. This week, another 18 Shining Stars have been added in the following twelve counties: Genesee, Livingston, Madison, Ontario, Orange, Schenectady, Schoharie, Seneca, Tioga, Wayne, Wyoming, and Yates. Citizens’ presence and voices at municipal board meetings and Constitutional Rallies is being heard, and making the difference. Attend to your elected officials, help them adopt and pass a resolution opposing Governor Cuomo’s Safe Act, and turn your municipality into the next liberty loving, Shining Star!