WHEREAS, the State of New York has passed a gun control law referred to as the SAFE Act, and,

WHEREAS, this act clearly indicates that the enforcement of this law is the responsibility of New York State, and,

RESOLVED, that the Montgomery County Legislature denies the State of New York permission to use its name, Seal of the County, letterhead or address for purposed of correspondence with legal and registered gun owners regarding permit recertification or for any other purpose associated with the SAFE Act,

FURTHER RESOLVED,  that certified copies of this resolution shall be forwarded to Governor Andrew M. Cuomo, Senator Cecilia Tkaczyk and Assemblyman Angelo Santabarbara, the Superintendent of the State Police, and the legislature of every County in the State of New York.
RESOLUTION VOTE, passed with Aye(7).  Legislator Duchessi voted Nay.  Legislator Dimond was absent.   (2/25/2014)

Lets have fun with the Freedom of Information Law (FOIL)! Almost every resolution directs that a copy be sent to Governor Cuomo. Those copies are FOILable information. Lets order Governor Cuomo (his office really) to send you a list of all counties, municipalities, and other bodies which have opposed the law and copied the Governor on their opposition!  (There are probably some resolutions we don’t know about yet.)

Best of all, this process is very simple and will take up little time, just a simple email. If you don’t get a response within 5 days then the governor is breaking the law. More information on FOIL here: http://www.dos.ny.gov/coog/freedomfaq.html

Ok, lets go, send an email to [email protected]
Subject: FOIL Request
———————————————————————–
I am looking for information on resolutions which have been passed and sent to Governor Cuomo. Please send lists of the following categories:

Please return the results electronically and without charge per FOIL law.

Send that email, then wait. If you do not receive a reply after 5 complete business days, send a follow up email saying that they are now not in compliance with the Freedom of Information Law.

We did this last year with great results:

I urge you to get familiar with FOIL and use it as a tool when needed to get information from government at every level in New York State.

St. Lawrence County legislators reached a bipartisan agreement Tuesday opposing the use of the county seal on pistol permit recertifications and other paperwork related to the New York SAFE Act and calling for the repeal of the law.

Use of the county’s logo implies that the county agrees with the SAFE Act but most of its residents do not, Legislator Alex A. MacKinnon, R-Fowler, said.

“I don’t know if we’re ever going to get it repealed because New York City likes it,” he said.

Mr. Lightfoot welcomed an amendment to his resolution from Mr. Burns requesting the repeal of the SAFE Act in its entirety, a stance that the majority of legislators had shied away from before.

No seal of approval for SAFE Act in Washington County

It was a close verbal vote, Friday, in Washington County,  however because the board’s votes are weighted based on population the amendment passed. 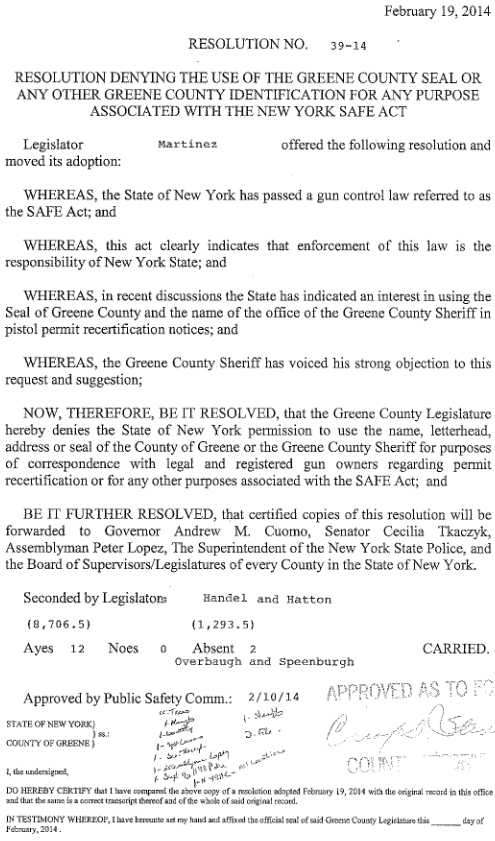 Orange County resolution opposing the use of the county seal

WHEREAS, Chapter 1 of the laws of 2013, known as the New York Secure Ammunition and Firearms Enforcement Act (“NY SAFE Act”) was signed into law by Governor Andrew M. Cuomo on January 15, 2013. The NY SAFE Act amends various provisions of New York Law in relation to firearms and ammunition; and

WHEREAS, the Orange County Legislature has vehemently opposed the NY SAFE Act, by Resolutions Nos. 50, 72 and 233 of 2013, (attached hereto and made a part hereof), given its impact on: (i) an individual’s right to keep and bear arms, (ii) the undue burdens the NY SAFE ACT places on local governments to implement its provisions, and (iii) the lack of state funding; and

WHEREAS, it has come to this Legislature’s attention that New York State agencies have expressed their intention to issue pistol permit “recertification” notices utilizing the seals of the respective counties of residence of pistol permit holders; and

WHEREAS, the New York Sate Association of County Clerks and many counties have gone on record opposing the New York State’s unauthorized use of their county seals and the name and likeness of county elected officials, without consent, for purposes of implementing the NY SAFE ACT; and

WHEREAS, Orange County Local Law No. 11 of 1999, entitled “A Local Law Regulating the Use of the Official Name, Seal and Authority of the County of Orange,” prohibits the use of any official county position, or title or the use of name, seal, flag, title, letterhead, symbols, property, facilities or resources of the government of the County of Orange for any private or “non-county purpose” or in connection with any private or non-county function, . . . ,” without prior authorization.

NOW THEREFORE, be it