COUNTY OF GREENE
TOWN OF GREENVILLE

Councilman Davis offered the following resolution and moved for its adoption, seconded by Councilman Stern:

WHEREAS, the Right of the People to Keep and Bear Arms is guaranteed as an Individual Right under the Second Amendment to the United States Constitution and that this right is regarded as an inalienable right of the people of the Town of Greenville; and

WHEREAS, the lawful ownership and use of firearms is, and has been, a valued tradition in the Town of Greenville and that the right to bear arms is exercised by many Town residents for which the Town derives economic and environmental benefits from safe forms of recreation involving firearms which includes hunting and target shooting; and

WHEREAS, our New York State representatives could not and did not have the time to request and receive the input of their constituents regarding this matter which is the stand by which the Town of Greenville holds itself to when it comes to the enactment of such a controversial law and is a matter of simple due process; and

WHEREAS, the crafting of the New York SAFE Act resulted in complex policy changes, many subject to interpretation and are confusing to a vast number of public officials as well as the law enforcement officials who are required to enforce and explain them; and

WHEREAS, in our opinion, there was no reason for the Governor to use a message of necessity to bring this bill to vote immediately and bypass the three day maturing process for all legislation; and

WHEREAS, requiring law-abiding firearms owners to verify ownership of certain types of firearms every five years, in addition to registering them on their permits, which now must also be renewed every five years, does not increase the safety of the public and is unnecessarily burdensome to the residents of New York State; and

WHEREAS, requiring documentation of all ammunition sales in New York State, as provided for in this legislation, is a significant unfunded mandate on businesses and is a back-door approach to all firearms registration; and

WHEREAS, this legislation fails to offer any meaningful solution to firearms violence and places increased burdens where they do not belong, square on the backs of law-abiding citizens; and

WHEREAS, while there some areas of the legislation that the Town of Greenville finds encouraging, such as addressing glaring shortcomings in the mental health system, the strengthening of Kendra’s Law and Mark’s Law (which provides additional penalties for assaulting first responders), as well as privacy protections for pistol permit holders, by and large, we find the legislation does little more than negatively impact lawful firearms ownership;

NOW, THEREFORE, BE IT RESOLVED, that the Town of Greenville Town Board does hereby demand the repeal of all the section of the New York SAFE Act which we believe infringes upon the right of the people to keep and bear arms; and is in our opinion, unconstitutional under both the Federal and State Constitution; and

BE IT FURTHER RESOLVED, that the Town of Greenville strongly encourages the members of the New York State Legislature to hold public hearings to address the issue of gun violence in a way that will produce meaningful results; and be it further

RESOLVED, that copies of this resolution be sent to Governor Andrew Cuomo, Senator Cecelia Tkaczyk, Assemblyman Peter Lopez and the New York State Association of Town. 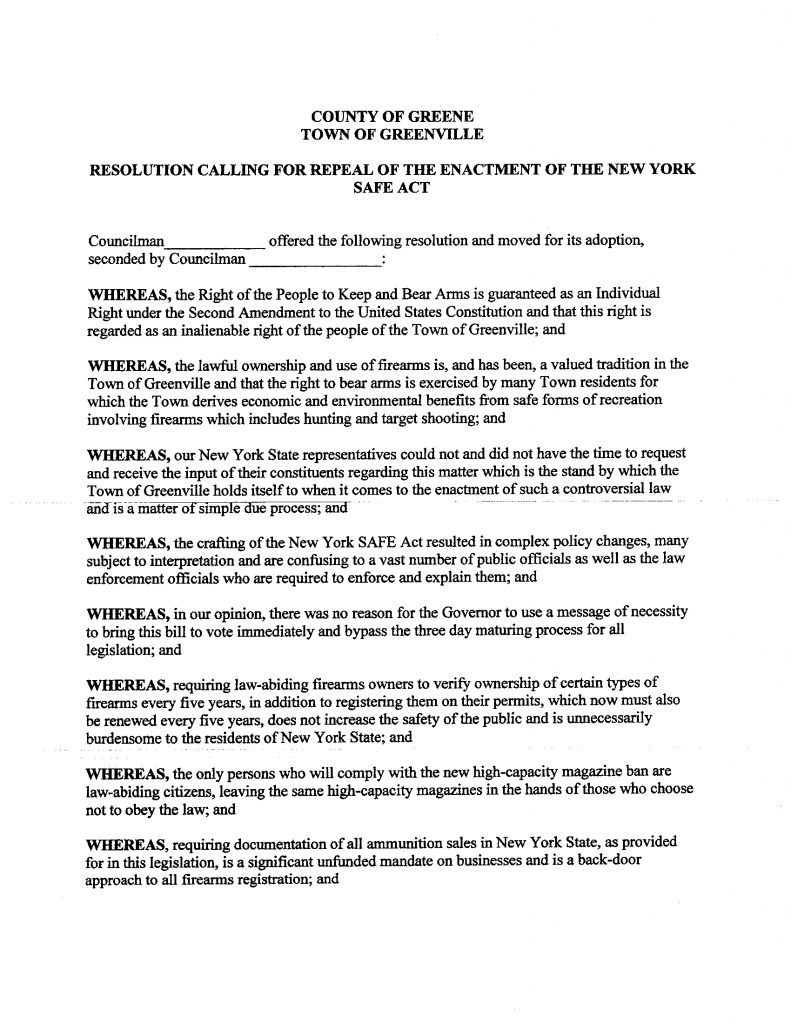