WHEREAS, the Bill of Rights of the Constitution of the United States, specifically the Second Amendment to the Constitution, guarantees the right of the people to keep and bear arms and states further that that right “shall not be infringed”, and

WHEREAS, all individuals, elected or appointed to an office of honor or profit in the civil or uniform services, take an oath to support and defend the Constitution of the United States, and

WHEREAS, the Supreme Court of the United States, in the case District of Columbia v. Heller (554 U.S. 570), decided June 26, 2008, held that the Second Amendment protects an individual right to possess a firearm unconnected with service in a militia, and to use that firearm for traditionally lawful purposes, such as self- defense within the home, and

WHEREAS, in another landmark decision the same Supreme Court, in the case McDonald v. Chicago, decided June 28, 2010, held that the right of an individual to “keep and bear arms” is protected by the Second Amendment and further, “is incorporated by the Due Process Clause of the Fourteenth Amendment and applies to the states”, and

WHEREAS, many of the residents of St. Lawrence County have expressed their displeasure not only with the provisions of the NY SAFE Act itself, but also the manner and method used to bring it to the floor and vote it into law, and

WHEREAS, using a message of necessity to bring forth and enact a law that has dozens of sections and changes in current laws, but only three of which take effect immediately, negates the argument that the speed with which this bill was brought forward was necessary, and

WHEREAS, the sheer size of the bill, the extent of the many new changes it brings and the very short time that the bill was made available to the New York State Senate and Assembly for review, effectively precluded discussion and debate on the provisions set forth in the bill, preventing the mature development of arguments, both for and against, and

WHEREAS, in an attempt to bring forth meaningful solutions for dealing with or preventing gun violence, this legislation and the majority of its provisions affect law abiding gun owners in negative and unnecessary ways and they were not given the opportunity to express their views or otherwise comment on the bill, and

WHEREAS, while there are provisions of the bill that have merit, for example; increased penalty for killing emergency responders, NICS checks for private sales of firearms, safe storage provisions, mental health record review, and increased penalties for the illegal use of a weapon; other provisions of the law, which run roughshod over second amendment rights, must be reconsidered and a new law should be introduced in a transparent manner, and it must be given the time necessary to review its provisions, engage in meaningful and constructive debate and allow public review, comment and input relative to the content of the bill, and

WHEREAS, the New York SAFE Act, as passed, will require County Clerks to carry out several provisions of the law but fails to address the responsibility for funding those additional duties, thus inflicting another unfunded mandate on already cash strapped counties,

NOW, THEREFORE, BE IT RESOLVED that the Board of Legislators joins with the twenty-seven other county boards in opposing those portions of the NY SAFE Act which infringe upon the rights of lawful gun owners and does little to address the underlying issues that confront our society as a whole, and

BE IT FURTHER RESOLVED that the Board of Legislators strongly encourages the members of the New York State Legislature to bring forth a bill that addresses the real problems confronted by today’s society and not jeopardize the rights of law abiding citizens, and allow time for public comment, and 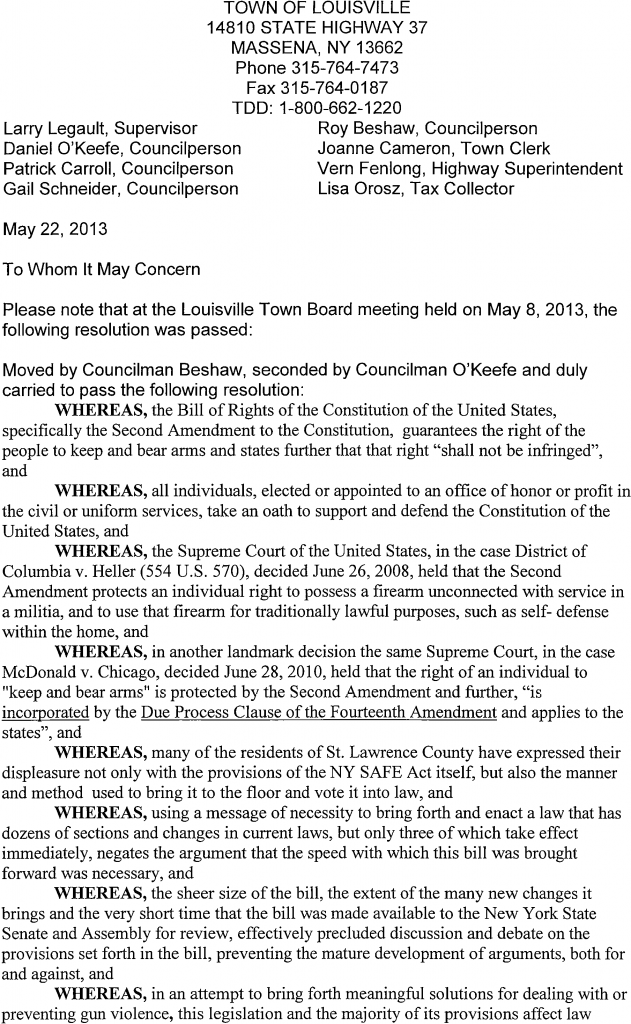 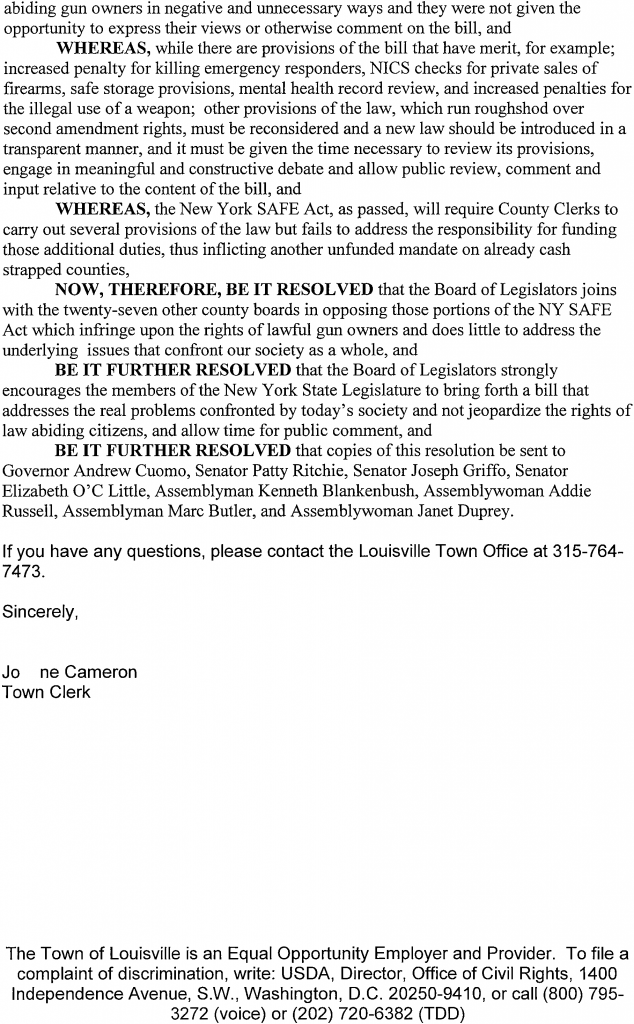 This entry was posted in Resolutions, Resolutions opposing and tagged Passed, TownOfLouisville. Bookmark the permalink.