Sheriff Whitney and County Clerk Rob Christman joined forces to request that the resolution denying the use of the County seal or any other Allegany County identification with regard to the NY SAFE Act be approved and referred to the full Board of Legislators. The resolution reads as below:

Whereas the State of New York has passed a gun control law referred to as the SAFE Act, and:

Whereas this act clearly indicates that enforcement of this law is the responsibility of New York State, and:

Whereas the County Sheriff and County Clerk have voiced their strong objection to this request and suggestion, Therefore be it

Resolved: That the Allegany County Board of Legislators denies the State of New York permission to use the name, letterhead, address or seal of the County of Allegany, Allegany County Sheriff or Allegany County Clerk for purposes of correspondence with legal and registered gun owners regarding permit recertification or for any other purpose associated with the SAFE Act, and be it further

Resolved: That copies of this resolution should be transmitted to the office of the Governor of New York State, The Superintendent of the New York State Police, New York State Senator Catharine Young, 148th District Assemblyman Joseph Giglio and the legislature of every county in the State of New York.

Support of the resolution, and direction to send it to InterCounty and NYSAC, was given on a motion by Legislator Healy, seconded by Legislator Ungermann, and carried.

Dee Victor Thomas Post, 1155 of The American Legion Department of New York resolution calling for repeal of the SAFE act

Originated: Americanism Committee of the Dee Victor Thomas Post, 1155, of the Department of New York

WHEREAS, The Preamble of The Constitution of The American Legion states, ” … We associate ourselves together for the following purposes: To uphold and defend the Constitution of the United States of America … “; and

WHEREAS, The Second Amendment to the Constitution affirms and the United States Supreme Court has repeatedly upheld the right of individuals to possess and carry firearms and to use them for lawful purposes; and

RESOLVED, By the Dee Victor Thomas Post, 1155 of The American Legion Department of New York in regular meeting assembled in Fillmore, New York, on April 27, 2013; and, be it finally

RESOLVED, That The American Legion respectfully demands that the SAFE ACT be repealed. 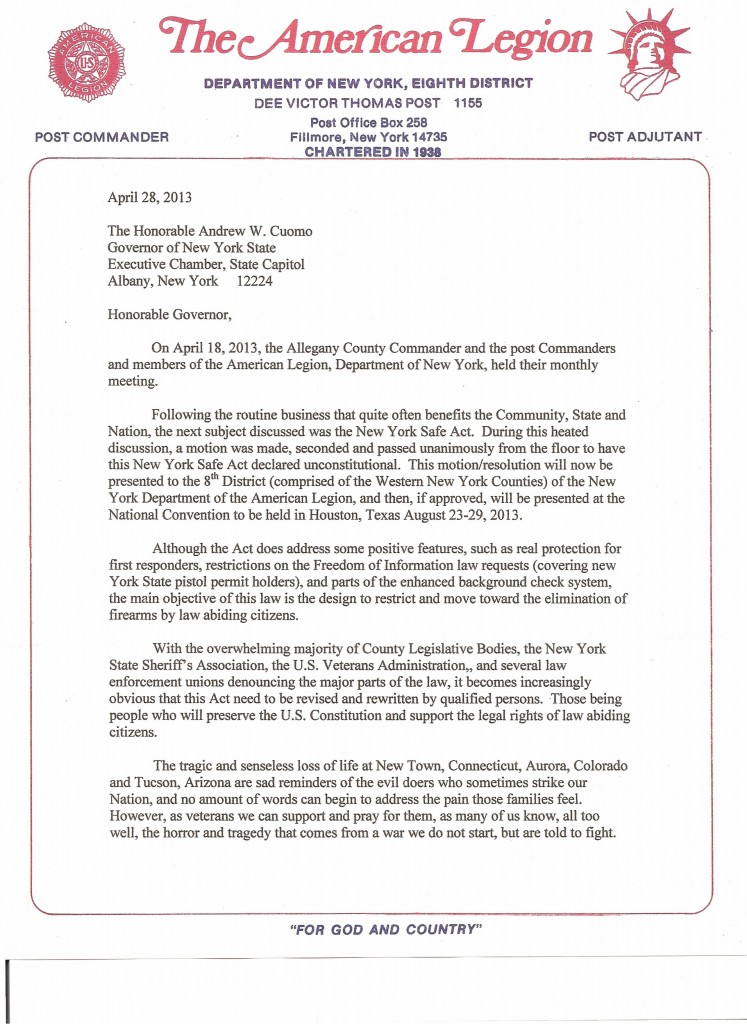 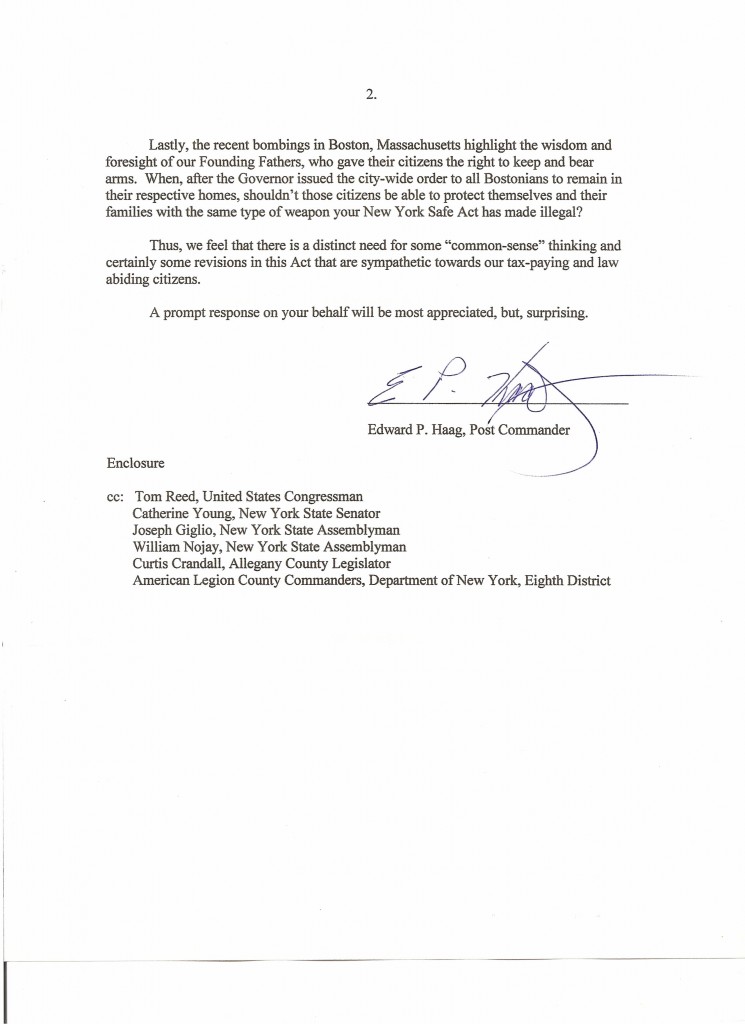 RESOLUTION CALLING FOR THE REPEAL OF THE NEW YORK SAFE ACT OF 2013Offered by: Ways and Means CommitteeWHEREAS, the New York State Legislature recently enacted and Governor Andrew Cuomo signed into law The New York Secure Ammunition and Firearms Enforcement Act of 2013 (“NY SAFE ACT”); andWHEREAS, this Legislation is viewed by many citizens of the State of New York as being extremely controversial as those citizens view this Legislation as infringing upon their rights guaranteed to them under the Second Amendment of the United States Constitution; andWHEREAS, each and every issue that comes before the New York State Legislature before an enactment deserves a fair and open discussion which incorporates all points of view in order to ensure that all citizens are heard and that the Legislation incorporates the various points of view expressed during that discussion and benefits all of the citizens of the State of New York; andWHEREAS, the NY SAFE ACT was adopted after minimal public discussion, contains serious flaws, i.e., police officers are not exempt, and having been on the desks of the members of the New York State Legislature for only a few hours, thereafter was literally adopted in the night and signed into law by Governor Andrew Cuomo; andWHEREAS, in 2011 amendments were made to the Open Meetings Law (Public Officers Law Section 103), requiring a public body prior to a meeting to post on its website, to the extent practicable, for public benefit all records that may be considered or discussed at that meeting; andWHEREAS, A.107 has been pre-filed before the New fork State Assembly for the 2013- 2014 Regular Session, to amend the Public Officers Law (Sections 84 and 90) in relation to publishing records of public interest by agencies ad the State Legislature, reading in part “…The people’s right to know the process of governmeçtal decision-making and to review the documents and statistics leading to determinations is basic to ouf society. Access to such information should not be thwarted by shrouding it with the cloak of secrecy or confidentiality.. andWHEREAS, the State of New York has a tradition and long history of conducting its deliberations and debates in the public view and that in the enactment of the NY SAFE ACT the New York State Legislature and Governor Andrew Cuomo acted in contradiction of this long, time honored tradition of an open government; andWHEREAS, the members of the Inter County Association of Western New York and the Inter County Legislative Committee of the Adirondacks at a joint meeting held February 6, 2013, at Albany, New York, expressed their concern that any legislation which addresses the ownership of guns and the sale of ammunition in the State of New York be conducted only after an open debate pursuant to which the public is allowed to participate and express their points of view; now, therefore; be itRESOLVED:1. That the Allegany County Board of Legislators calls for the repeal of the New York Secure Ammunition and Firearms Enforcement Act of 2013 (“NY SAFE ACT”);2. That the Allegany County Board of Legislators supports the positions adopted by resolution from the New York State County Clerk’s Association and the State Sheriff’s Association.3. That the Allegany County Board of Legislators directs that certified copies of this resolution be forwarded to Governor Andrew Cuomo, members of the New York State Legislature, NYSAC, NACO, New York State Association of Towns, and each New York State County.