[A]t the Ways and means meeting, the legislature approved a resolution to deny the use of County insignia on any material concerning the SAFE Act.

The legislature formally called for the gun control law’s repeal a year ago. Now it’s joined the chorus in not using the county or sheriff’s seal or letterhead on any application for pistol permit recertification as part of the SAFE Act’s implementation.

[The] board unanimously approved 15 of the 16 resolutions before them with minimal discussion. The exception to this was resolution number 31, which proposed to ‘deny the State of New York permission to use the seal of the County of Saratoga, the Saratoga County Sheriff and the Saratoga County Clerk for any purpose associated with the New York State SAFE act.’ The controversial SAFE act requires licensed gun owners to recertify all firearms within a period of five years. The resolution passed. Voting against the resolution were Supervisors Peter Martin of Saratoga Springs and supervisor Preston Jenkins of Moreau.

Orleans County won’t let the State of New York use the county seal for any enforcement efforts with the SAFE Act, a controversial gun control measure approved by the State Legislature and Gov. Andrew Cuomo last January.

State officials want to use county seals with the state seal on pistol recertification notices. Orleans doesn’t want its seal associated with the SAFE Act.

The county also doesn’t want to devote its resources, whether law enforcement or at the county clerks’ office, to enforcing and processing the SAFE Act. 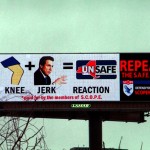 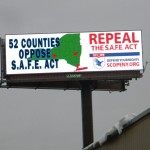 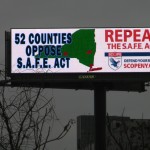 Oswego County Clerk Michael Backus said he voted in November for a resolution banning the state from using county seals in his SAFE Act promotions.

“I voted for, and the (state) Clerks Association unanimously passed, a resolution opposed to the use of county seals regarding the SAFE Act,” Backus said.

“Quite honestly, it’s another example of how flawed this law is that the governor shoved through the legislature,” Backus said. “It was advertised to have no financial impact on counties and that has been proven to be false.”

Correction to article: As of December 26th 2013, this news article is incorrect about the number of counties objecting to use of their county seal or logo in conjunction with state SAFE act communications.  52 counties have opposed the so called SAFE act, but the movement to pass resolutions regarding use of county seal or logo is just beginning at this point.  We are keeping a separate list of county seal resolutions; click to see the current total.

Earlier this month, the Delaware County Board of Supervisors joined 56 other New York State counties by passing a resolution objecting to the use of the county’s seal or logo on the state’s website associated with SAFE Act required pistol permit recertifications or any other SAFE Act associated websites or literature.

County officials expressed particular frustration and, in some cases, anger over the additional resources the law is requiring from county officials, including the sheriff and county clerk, in enforcing a law which was supposed to be the responsibility of the state.

“It’s just another unfunded mandate from Albany”, said Davenport Supervisor Dennis Valente. “And the state seems to be handling it with the same amount of efficiency they are using with the STAR program.”

Middletown Supervisor Marjorie Miller was the only supervisor present at the meeting to vote against the resolution.