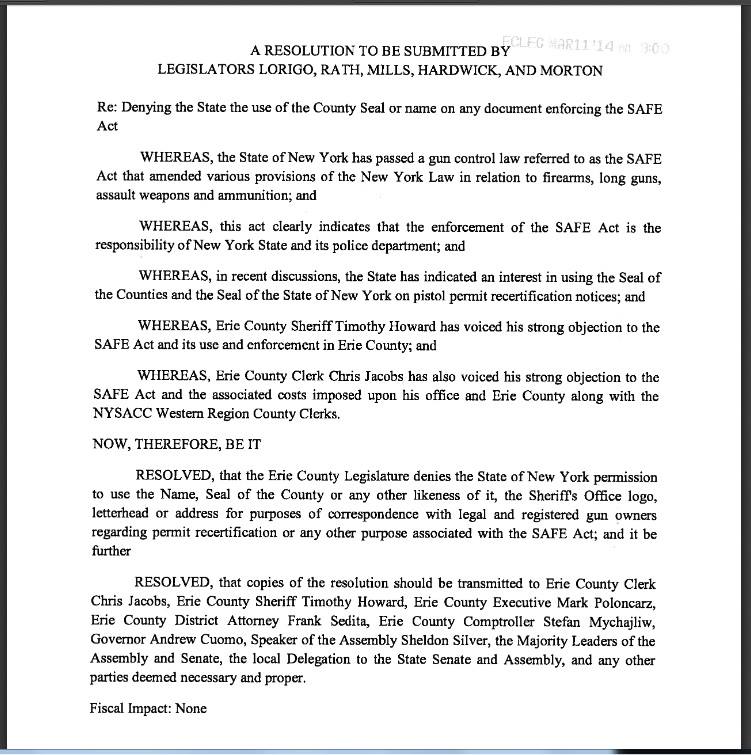 At its monthly meeting Thursday, the Association of Erie County Governments went on record in opposition to the 2013 New York Secure Ammunition and Firearms Enforcement Act, commonly known as the NY SAFE Act. The law was approved Jan. 15 by the State Legislature and signed into law by Gov. Andrew M. Cuomo the same day.

The association is made up of representative lawmakers from the 25 towns, 16 villages and three cities in Erie County. They represent about 1 million people.

The association approved a resolution that says the SAFE Act is a violation of the Second Amendment of the Constitution and that it infringes on the rights of citizens in the state without due process.

The Erie County Federation of Sportsmen’s Clubs is an umbrella organization of forty nine hunting, fishing, trapping and conservation clubs, representing 10000 individual members. With regard to the NYS SAFE Act, this is a flagrant example of a “gun-grab” action by the leaders of our state government and not even a subtle approach to the eventual goal of complete confiscation of guns from our populace. It appears that you want to lead this parade. For those who say that the “pro-gunners” are over-reacting, we simply reply, “You obviously have NOT studied your history.” Laws such as the SAFE Act blatantly attack the specific RIGHT to keep and bear arms for defense that is guaranteed by the Second Amendment. Our founders did not write the Second Amendment in order to guarantee a right to hunt. They wrote it right after the First Amendment. Why? They remembered England and why they fled it in the first place. FREEDOM! Some argue that the SAFE ACT is not confiscation. True. But it is one more step down the slippery slope to that end.

The way you and the State Legislature rushed this bill through for a vote, disdainfully ignoring the proper procedures for passing legislation, was contemptible. Those procedures were put in place in order to avoid passage of bills without giving the public time to give considered reaction and thoughtful input into proposed legislation. Those procedures were only meant to be put aside in times of dire emergencies. No such emergency existed, other than your blatant need to have NY be the first state to pass “gun control” laws in order to further your political ambitions. Ignoring those procedures resulted in a law which was ridiculously flawed. For example, police officers are in violation of the law if they fully load the weapons most of them carry on duty. They are also guilty of a crime if they merely carry those weapons onto school property, even in response to something like the Sandy Hook shootings. This callous disregard of proper legislative procedures alone should be reason for repealing this law.

Most frequently the reason given for the need for passage of the SAFE Act is that it is a powerful deterrent to the terrible epidemic of “gun violence” in this country. This is nothing but political pandering, preying on the lack of knowledge on firearms and firearms issues by the general public. First, while there may be a few reasonable provisions in this act, none of them have to do with the registration and/or banning of any type of “assault weapons.” Criminals by their very definition break laws. They are not going to pay any attention to this law at all. Second, even the most minimal amount of research would reveal that these types of laws are not effective in deterring violence committed with guns. Despite the fact that gun ownership has dramatically risen since the expiration of the “Clinton Gun Ban” in 2004, “gun violence” has dramatically decreased. The Clinton Justice Dept. conducted a survey of 51 studies after enactment of the 1994 “Clinton Gun Ban” and concluded there was no credible evidence that such laws affected ”gun violence.” Just a couple of weeks ago, an internal memo from the Obama administration’s Justice Dept. surfaced coming to the same conclusion. See the following link for details:

Finally, in case you haven’t seen this, here is a link to the various county legislatures that have written resolutions opposing the SAFE ACT. It is being updated frequently as the list continues to grow. Perhaps it’s time that you really start to represent all of the citizens of NY, not just your NYC-Long Island base.

Thank you for your consideration of the above comments. Hopefully, you will make the right decision and support repeal of the SAFE Act.

Erie County legislators have added their voices to a chorus of people across the state calling for the new state gun law to be repealed.

The County Legislature voted, 7 to 4, on Thursday to approve a resolution calling on the state to repeal and revise the New York State SAFE Act of 2013 “in a manner that is respectful of the Second Amendment rights of New Yorkers.”

The Erie County Legislature’s Minority Caucus sponsored a resolution supporting the repeal and revision of the New York Secure Ammunition and Firearms Enforcement Act of 2013 on Feb. 11. The minority caucus is led by Minority Leader John Mills.

The resolution was submitted by legislators Edward Rath, Lynne Dixon, Kevin Hardwick and Joseph Lorigo, as well as Mills.

In their opposition to the SAFE Act, the legislators called the swiftness of the legislation’s passage “remarkable for the state Legislature and governor, though lamentably not admirable, in this particular instance.” The Feb. 11 resolution went on to say that the legislators felt that part of the SAFE Act was “thoughtful,” in its attempt to “reduce instances of gun violence involving New Yorkers,” but that they believed other aspects of the act were “knee-jerk reactions made without the benefit of appropriate contemplation at best or, at worst, disingenuous fee grabs, cloaked as security measures.”

WHEREAS, The Association of Erie County Governments who represents the voice of the people, is made up of 25 Towns, 16 Villages and 3 Cities that represent the County of Erie, in the State of New York with a population of approximately 1,000,000 people, and

WHEREAS, On Monday January 14th, 2013 the rights under the second Amendment of our Constitution was infringed on without due process, and

WHEREAS, The Gun Control Bill (S.2230) known as NY SAFE Act was rushed through the Senate & Assembly without a single Public hearing or input from the various Law enforcement agencies located around our State, and

WHEREAS, Even the State lawmakers did not have time to review the bill as presented leaving questions about implementation and regulation of this new law, and

WHEREAS, This law should focus on increasing penalties for criminals who use firearms to harm and threaten law abiding citizens and address the issues of mental illness related to violence, and

WHEREAS, The Association of Erie County Governments realizes that NY SAFE Act, gun control law must be repealed and replace the restrictive parts of the enacted law, and

NOW THEREFORE BE IT RESOLVED, that the Association of Erie County Governments urgently asks Governor Andrew M. Cuomo & the Legislative leaders to suspend this law as soon as possible and to look at all of the aspects of gun control using the proper legal procedure to bring about a law that will address gun control in a more logical manner, focusing on the real issues related to gun control – a law that will strengthen the effect on public safety and not infringe upon our constitutional rights.

The Erie County Sheriff’s PBA is the organization that represents the men and women of the Erie County Sheriff’s Police Services Division. All are sworn Deputy Sheriff’s and certified New York State police officers engaged in criminal law enforcement throughout Erie County. All have taken an oath… to uphold the Constitution of the United States. Our membership, like many citizens of New York are outraged at Governor Cuomo’s unprecedented attack on our second amendment rights. Since 1977 three Erie County Sheriff’s Deputies have been murdered and three wounded by gunfire in the line of duty. In addition two deputies have been forced to use deadly force to defend themselves from lethal attack by criminals. There is a widespread misconception that law enforcement officers favor additional restrictions on firearms ownership by law abiding citizens. Nothing could be further from the truth. Rank and file police officers see every day the aftermath of violent criminal attacks on defenseless victims. The uniformed police officers paraded out as window dressing during the signing of these laws are simply lap dogs seeking to further their own political ambitions. The right of self-defense is an inherent right bestowed upon us by our creator. It is not granted to us by elitist politicians like Andrew Cuomo and Sheldon Silver to be denied when they see fit. Do not be misled; the second amendment is not about hunting or target shooting. It is about the right of law abiding citizens to defend themselves and is the last line of defense against an over reaching and tyrannical government. The NYS Safe Act was rammed through the legislature by Cuomo ignoring the usual three day requirement for elected representatives to be able to review the legislation and receive feedback from their constituents. It is nothing more than a tool used by Cuomo to further his personal political ambitions. This law will do nothing to reduce violent crime, as it is painfully clear that those intent on victimizing others will ignore its provisions. It will simply create more victims. It is time for all New Yorkers to wake up. We must confront the societal breakdowns which cause the type of horrific mass shootings incidents we have recently seen, many of which are directly caused by the very policies that politicians like Cuomo seek to advance. On January 24, 2013 the Erie County Sheriff’s PBA unanimously passed a resolution of non-support for the NYS Safe Act. We will work tirelessly to see this law overturned. We commend and will support those elected officials with the courage to oppose this misguided law and condemn those that did not. We are citizens first and police officers second. We do not pick and choose which amendments of the United States Constitutions we will uphold. Politicians who swear an oath to uphold the constitution should do the same.

The subject of guns is dominating the political landscape across the United States, especially in New York State. The recently passed NY SAFE Act is the toughest set of gun laws in the nation.

The Association of Erie County Governments is looking into a resolution opposing the legislation, while a local top cop voices his support for the tough gun legislation.

The Association says many members are “concerned” about the way in which the SAFE Act passed.